The rivalry between the two trading countries led - among other things - to four wars that are known in English as the (Anglo-)Dutch wars and in the Netherlands as the Nederlandse-Engelse (Zee)oorlogen. (Dutch-English (Naval) Wars). Three of them were fought in the seventeenth century, one in the eighteenth. Trade conflicts and naval supremacy were at stake in these wars. For instance, the Dutch hegemony in the East Indies often led to dissension. The Dutch herring fleet operating in English coastal waters did not go down well with the English either. 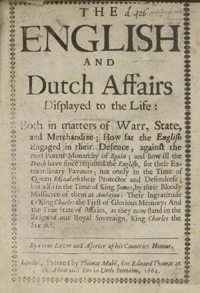 It goes without saying that these clashes influenced the opinion the English and the Dutch had of each other. Every time a war broke out, there was an upsurge of propaganda activities on both sides. As always, each party was convinced it had God on its side. In 1664, for instance, an Englishman pointed out in ‘The English and Dutch affairs displayed to the life’ that God’s punitive hand was instrumental in the death due to plague of more than a thousand inhabitants of Amsterdam within a week. Two years later, the Dutch lost no time in seeing the 1666 Great Fire of London as our Lord’s justified punishment for the sinful life led by King Charles II and his subjects or for ‘Holmes’ Bonfire’, as Sir Robert Holmes’ cowardly attack on the Dutch merchant fleet in the Vlie passage to the sea and the plundering of the island of Terschelling were called. The anger of the English at the Ambon murder (1623) found its counterpart in the Dutch indignation over the decapitation of King Charles I Stuart in 1649.

The first Anglo-Dutch War (1652-1654)
In 1651, the English Parliament voted in the Act of Navigation limiting cargo trade to England to the English merchant fleet. The relations between both countries turned sour and it was not long before a clash of arms followed. When the Dutch vessels under Maarten Harpertsz. Tromp engaged the English fleet under Admiral Robert Blake off Dover in 1652, they refused to make the first salute. A battle ensued (Battle of Goodwin Sands). A mission to London failed, and one naval battle after another was fought out. In August 1652, Michiel de Ruyter defeated the English fleet off Plymouth, but then the tide turned. In October 1652, Witte de With was defeated by Admiral Blake at the Battle of Kentish Knock; in February 1653, Tromp was defeated at the three-day battle that took place between Portland and Calais (Battle of Portland) and again four months later at the battle fought off Nieuwpoort. Th English thereupon laid a blockade along the Dutch coast, but it was lifted as early as August following sea battles off Wijk aan Zee and Ter Heijde (Battle of Scheveningen). Unfortunately Admiral Maarten Harpertsz. Tromp fell at the latter.

On 15 April 1654, the Treaty of Westminster put an end to the first Anglo-Dutch War. The terms of peace were unfavourable for the Dutch and the Act of Navigation remained in force. Moreover, the Treaty included a secret clause (the so-called Act of Seclusion) stipulating that William III, the young prince of Orange and the son of Stadholder William II, would never be allowed to become stadholder himself.

Second Anglo-Dutch War (1665-1667)
Charles II, who had ascended the English throne in 1660, did everything possible to have William III designated as stadholder of the Republic of the United Netherlands. To achieve his goal, he played the pro-Orangists and their adversaries off against each another. In England, the mood was bellicose: the country hoped to frustrate Dutch trade to such an extent that they would be able to become the dominant trading nation. In 1664, England conquered the island of Curaçao, New Amsterdam (now New York) and the West African strongholds, from where the Dutch West India Company operated the slave trade. Michiel de Ruyter was sent to Africa and managed to reconquer the lost possessions, but the war shifted to Europe in 1665.

The Battle of Lowestoft, the first major naval encounter, took place on 13 June 1665 and ended in an English victory. On that occasion, Admiral James of Wassenaar Obdam’s flagship De Eendragt exploded. In January 1666, France involved itself in the war on the side of the Dutch and Fleet Admiral Michiel de Ruyter became known for the great successes he achieved in the Four Days’ Naval Battle (1-4 June 1666) against the English fleet under the command of General George Monck. He is also famed for his adventurous raid on Chatham, known in English as the Battle of Medway. The Dutch fleet sailed up the Thames as far as Gravesend and then up the Medway as far as Chatham. There it broke through the chain barrier, sank four ships and towed the pride of the English fleet, HMS Royal Charles, off to the Netherlands.

On 9 August 1666, Admiral Robert Holmes led an attack against the East Indiamen that were moored in the Vlie. Some 150 ships were destroyed and the town of West-Terschelling was sacked. This attack, that was to become known as Holmes’ Bonfire dealt a heavy blow both to the Dutch merchant navy and to the entire war effort. On the other side, the English lost only twelve men. When London was ravaged by the Great Fire a month later, many people in the Netherlands saw the event as God’ s punishment for the attack.

The terms of the Treaty of Breda, which put an end to the Second Anglo-Dutch War, were considered to be favourable for the Netherlands. The English navigation laws were relaxed. On the other hand, the Republic had to reconcile itself with the fact that New Amsterdam would remain in English hands for the time being. The town was renamed New York, after James II, Duke of York, and the brother of the English King. Surinam remained a Dutch possession. In fact, a final decision regarding the ‘ownership’ of the colonies was postponed.

Third Anglo-Dutch Was (1672-1674)
The Year of Disaster is the name the Dutch still give to the year 1672. England had joined an alliance consisting of France, Munster and Cologne. On 6 April of that year, these countries declared war on the Republic. The Netherlands were attacked on land and at sea. Michiel de Ruyter managed to inflict a number of heavy losses on the Anglo-French fleet and was able to prevent an invasion from the sea. On land, events took a less favourable course for the Dutch. A 120,000-strong French army marched on Cologne and invaded the Republic via the Rhine. At the same time, the bishop of Munster and his troops crossed the border in the eastern province of Overijssel. History books describe 1672 as the year ‘the people took leave of their senses, the government was at its wits’ end and the country irretrievably lost’.

In great haste, William III was appointed stadholder and Johan de Witt resigned as Grand Pensionary. The popular fury showed itself in the gruesome lynching that was to cost the life of both Johan de Witt and his brother Cornelis.

The Second Treaty of Westminster ended the war. England acquired the right of first salute and received an indemnification of a million English pounds. However, William III had succeeded in breaking up the Anglo-French alliance, which had been so dangerous for the Netherlands. New Amsterdam, which the Dutch had managed to reconquer in 1673 and had now baptized Nieuw-Oranje (New Orange), was handed over to the English for good, but the Dutch retained Surinam.

Fourth Anglo-Dutch War (1780-1784)
Since the Glorious Revolution and the accession to the English throne of William III and Mary II Stuart, trade supremacy had shifted to England, with London becoming increasingly important as a centre of trade. In the American colonies, the Netherlands supported the rebellion against English rule. The Dutch supplied the Americans with weapons and ammunition via the isle of St Eustatius in the Caribbean. America was an example for the Dutch Patriots who wanted to restrict stadholder William V’s power and establish a more democratic form of government.

In 1780, the English arrested Henry Laurens, the newly appointed American ambassador to the Netherlands on his way to Amsterdam. A secret agreement between the Amsterdam merchant Jean de Neufville and the American diplomat William Lee was found in his luggage. Although both gentlemen had acted in a private capacity, without support from their respective governments, England took the matter most seriously. Moreover, it feared that the Netherlands would join the Union of Armed Neutrality formed by Russia, Sweden and Denmark, which – just as the Netherlands – had a lot of trouble with the English, who ran in neutral ships on a regular basis. These countries wanted to maintain their neutrality, by force of arms if need be and this would mean further protection for the trade with America. England declared war on the Republic, thereby depriving the Netherlands of their status of neutral country. As a result, the Republic could not rely on the support of allies, who did not want to engage in a naval war with England. A well-known Dutch victory was the Battle of the Dogger Bank; however, the Dutch fleet was not to leave port any more after that battle as it was not strong enough to face another engagement. In February 1781, the English conquered St. Eustatius, laying their hands on a great number of ships, and a lot of merchandise and weapons at the same time. Moreover, they conquered all the African strongholds of the West India Company, except Elmina, which was to remain a Dutch colony (the last) in Africa for about another century.

In 1784, the Treaty of Paris put an end to the Fourth Anglo-Dutch War. A year before, an armistice had already been concluded. England received the right of free navigation in the East Indies; the Republic had to give up Negapatnam on the east coast of India. As it turned out, the fourth Anglo Dutch War was to mark the beginning of the end for the Republic of the United Netherlands. 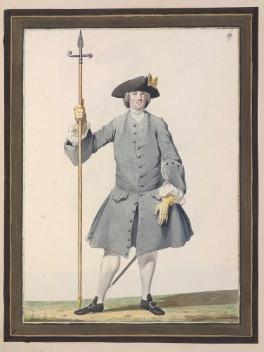 [Figure in military costume. No caption] 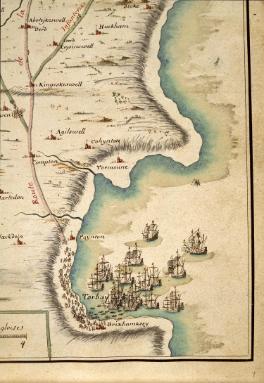 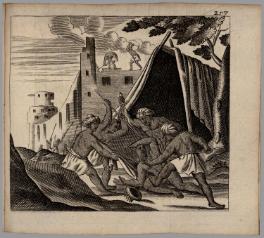 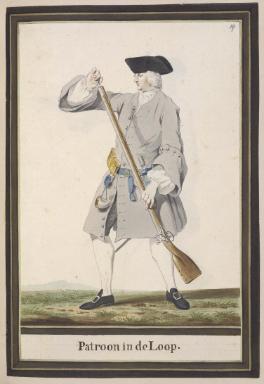