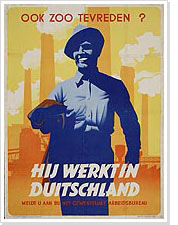 Thousands of Dutch labourers left for Germany voluntarily to work in German factories and companies. They were lured there by handsomely executed posters with well-fed, tanned men and clean workplaces. Working in Germany was not a form of treason, according to German propaganda, but rather served the Dutch people's interests.

This 'voluntary' employment vanished to the background in 1942. A diminishing number of Dutch labourers felt inclined to inform about job openings in the Third Reich. The colourful propaganda posters turned out not to correspond with reality.
As of early 1943, all Dutch men aged 18 to 35 were required to report to employment offices. But this measure failed to win the German war economy many workers. Dutch civil servants enabled numerous exemptions, and workers required to report went into hiding.

In the last year of the war, the Germans resorted to methods of outright terror. Raids were organised on a large scale and tens of thousands of men were transported to Germany. An estimated number of 600,000 Dutch men worked in Germany during the war for short or long periods of time.