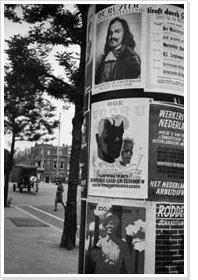 In 1944, the Dutch government exiled in London made an appeal via Radio Orange to the population in occupied territory to collect material from the war years for posterity. After the liberation in May 1945, an appeal was made to send the saved material to the newly founded National Institute for War Documentation, now called the Netherlands Institute for War Documentation (NIOD). In the first post-war years, the NIOD devoted nearly all of its energy to collecting and sorting the material. A collection of 5000 war posters was built up over the years.

Most of the posters come from the German occupier's archive and from Mussert's NSB. Many Dutch municipalities also sent in copies of placards that had been hung up by order of the Germans. Employees of advertising agencies who had earned their living from 1940 to 1945 by hanging up propaganda posters turned out to have kept copies, and were glad to hand them in.

In the early 1980s, the NIOD acknowledged that the building on the Herengracht in Amsterdam offered insufficient possibilities for preserving posters by contemporary standards. The Royal Library was found willing to take over management of the posters and to perform a thorough restoration of the collection.

The complete War Poster collection was digitised in 2002 as part of the project The Memory.