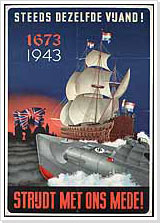 During the second half of the occupation, propaganda efforts remained at full force. The way the war was dealt with, however, changed as the impending German defeat became evident from the war. The propaganda strategists operated increasingly from a defensive, aggressive stance. Themes like 'fear' and 'terror' became predominant. The misery of the East, caused by the 'Asian hordes', and the 'terrors' that were to result from the long-expected allied invasion received a great deal of attention.

The successful allied landing in Normandy in June 1944 caused great euphoria in occupied Holland. Especially now that the German army had an actual Second Front to deal with, most of the Dutch population expected the liberation to follow soon after. The occupier therefore launched yet another vast anti-allied propaganda campaign. Optimism was to be tempered by presenting the flipside of the medal. The population was told that the liberation would result in the unacceptably high price of countless civilian victims.