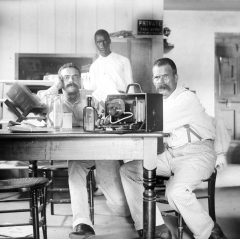 Ever since the 19th century images have been collected to show the Dutch public what life in the colonies was like. This was done by means of exhibitions, publications and education.

The most important Antillean photos from this early period originate from the Soublette et Fils photo studio in Curaçao. Private individuals also donated their photo material to the Colonial Museum of the time.  For example, Mrs. C.A. van Dijk-Kooiman donated negatives dating from 1901 and J. Boldingh donated negatives dating from 1906. A photographic report by the geologist M. Rutten from 1936 gives a view of the geological conditions, the flora and fauna, but inhabitants and visitors were also extensively portrayed.

After the Second World War the Antilles islands became more visible through the loss of the Netherlands Indies and later Suriname. In addition, the islands, and in particular Curaçao and Arunba, became more important because of the impact of the oil industry. Several travellers visited the islands in the 1940s and 1950s, for both business and leisure. The increased interest in the islands can be seen in the collections of, among other, Messrs. W.L. Utermark, J. Blaauboer, J.H. Westermann and G.J. Kruyer.

From 1960 onwards the KIT (Royal Tropical Institute) itself actively went on journeys to build up photographic and slide collections on the countries in the tropics. The Netherlands Antilles were comprehensively visited by Mr. B. Lawson in 1964 but later travellers returned to the islands regularly and donated their photo and slide collections to the KIT.

Examples from this collection Description of the Dutch Caribbean