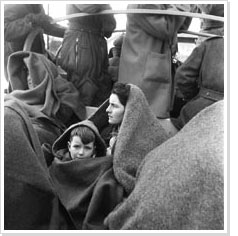 During the night of 31 January 1953, a flood disaster hit the South-west of the Netherlands. About 1850 people and tens of thousands of animals lost their lives. Around 100,000 people had to be evacuated, 4500 buildings were destroyed and many more were damaged. Almost 200,000 hectares of land were flooded. Nine months later the last hole in the dike was closed.

Of the numerous floods that have swept the Netherlands, this was the first one to be documented photographically on a large scale. Journalists, photographers and filmmakers travelled to the disaster area in large numbers. For this website all photographs made in February 1953 of the flood disaster by Dolf Kruger, Ed van der Elsken, Aart Klein, Kees Molkenboer, Cas Oorthuys and Ed van Wijk have been scanned.

Examples from this collection The Big Flood of 1953 photographed