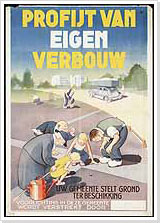 A large part of the collection consists of locally and regionally published text posters.
The mayors of large and small municipalities would inform their citizens through soberly designed placards of matters like air-raid protection measures and the introduction of the identity card. In doing so, the population was encouraged not to resist the German occupier; 'order and calm' was the word.

The occupation brought the population many changes in daily life. One of the most far-reaching results of the war was the scarcity of products, especially food. The Dutch government offered advice through posters on how to keep households running. A distribution system was introduced. In an endless row of 'Announcements', the authorities announced what food products were available that week for what coupon. Economy in energy usage was promoted in colourful posters.

Cultural life and nightlife ran its regular course in the Netherlands during the occupation. It served the Germans' best interest to accommodate the desire to forget about daily troubles.